I posted earlier today about the text console library which can be found on John Romero’s blog at www.planetromero.com

and started playing around a bit. In fact I started playing around with it and I was surprised how fun it can be writing games like I did long long time ago. Now all of you know WinSnake of course (the WinSnake which can be found on this blog ;)) and I thought it would be a cool idea to make a retro version out of it. Not that WinSnake would be worth but because it is fun. After trying a bit I took the sounds I used in WinSnake and put together a small game with 6 mazes.

to enhance everything. So I did. I downloaded the FMOD library and to be honest I’m very happy with the result. The complete game was finished within few hours. I never worked with FMOD before but it was so easy thanks to the documentation and the samples. Maybe I shouldn’t invest to much time in developing the sound system for D+ but using fmod instead (we will see…).

So enough talking, download RetroSnake and play. Be sure to visit John Romeros Blog on www.planetromero.com

or with the link below. 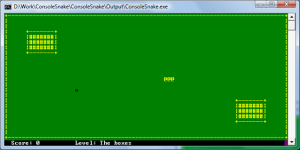 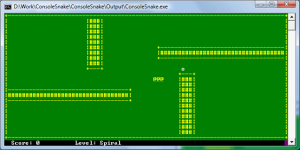 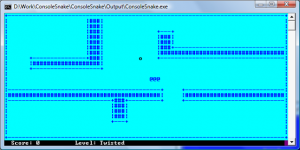