It’s done. SteamIt is finally published to the store and available for download. After a short beta the app is now available for everyone. What you get when you download now. By the time of this writing the following features are already implemented:

Sounds familiar? Right! As some of you might know, SteamCenter, the successfull predecessor of SteamIt was pulled off the store due to naming problems. I was not allowed to use the name SteamCenter anymore and this came out of nowhere. So since the good old SteamCenter was technically outdated and sadly still with many bugs I decided to rewrite the app from scratch using the latest available technologies for the great Windows 10 mobile platform. SteamIt uses AngularJS which is currently the way to go when it comes to web development.

What can I say about SteamIt?
Nothing. Really. I’m very satisfied with the result. Developing a “native” Windows Phone app using web technologies was a blast. I had so much fun. I also think that development was a bit faster, but to 100% more fun compared to SteamCenter which was developed using Silverlight and C#.
I think the current app is a more advanced beta. It’s far from bug free but it’s already way more stable than the release candidate of SteamCenter. Give it a try, it’s free.

What features are planned? Oh, good question. There is enough stuff I would like to include. Many things are simply not possible due to the nature of the official Steam web API, others are possible but not 100% Steam license complient. There will be stuff added soon to hopefully further enhance the app but don’t nail me on specific features.

Here is a list of what is planned and what is in progress to give you a short overview of what will come in “near” future:

Anything missing? Nope, that’s all for now. The list might change during development or extended according to use feedback but for now this is all we are talking about.

Hit the link below and get SteamIt for your Windows Phone 10. 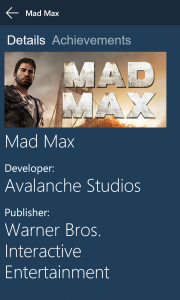